Episode 3: Kids in a Pandemic: In Their Own Words – with Izzie Donnelly 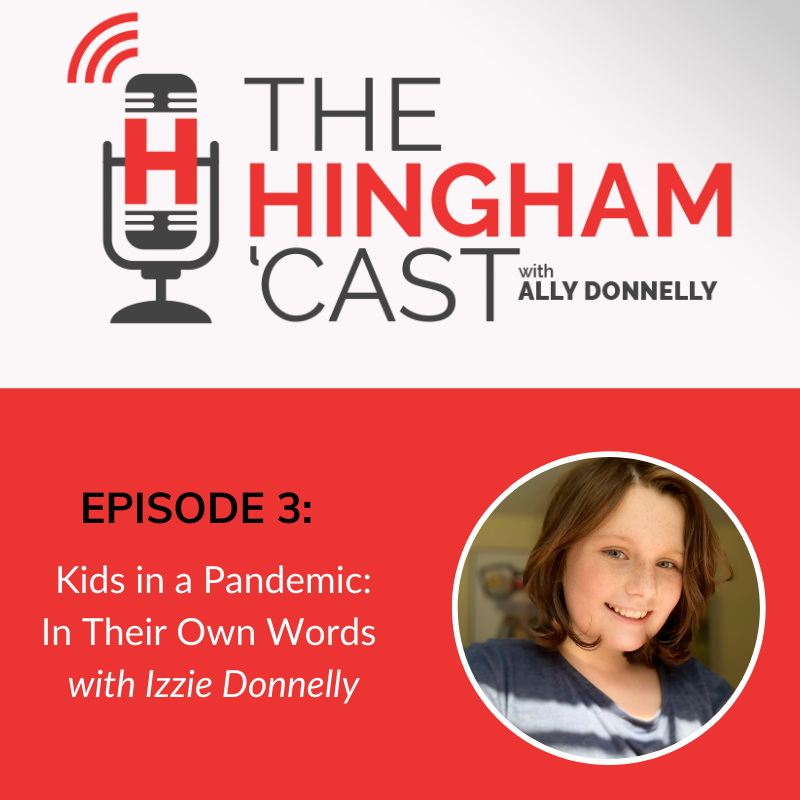 This episode started as a mic check. I asked my kids to do interviews with me so I could test my new microphones. But the conversations were so revealing that I asked my oldest daughter Izzie if I could share ours with you.

She’s in 6th grade, 12-years-old, in middle school. Her last day of in-person elementary school was at the beginning of a pandemic and she never really got to say goodbye–to her physical classroom, her teachers, the custodian, and other staff she liked so much. And her classmates in a lot of ways. We talked in November when news of a vaccine was promising but not here yet. I’ve edited out the large majority of her “Like, likes,” for my sanity and yours.

We were eight months in and I asked her what she was thinking. “It’s really crazy,” she said. “I was thinking about last year for me and that feels like it was such a long time ago and it really wasn’t a long time ago. And how the world can change in such a short amount of time is really insane.”

How does that make you feel, I asked.

“Scared, honestly,” she said. “It’s kind of stressful for me like anything can kind of happened and I never really expected, obviously no one would expect this, but of all the things you would think could go wrong this–I feel like this wasn’t anything anyone really expected or ever thought of–and this is our world right now.”

I asked her what worried her, “I guess the fact that everything just kind of changed and like so much went wrong in a really short amount of time,” she said. “And it scares me kind of how much things people have lost in their lives, people, but also, activities. I lost theater and I miss it. I was thinking about that the other day how much I miss it.” She talked about how jarring it was to move between our old and new realities. “I’ll look at a picture or watch a movie and my instant thing is, ‘Why aren’t they wearing masks?’ And that’s weird,” she said. “Or we were talking about quarantine and I had no idea what that word meant and now that word is part of my vocabulary. I’ve learned a lot in a way from this but I’ve lost a lot too.”

A seismic shift for all our kids has been school. “Online school is really hard because of the online part of it,” Izzie said. “I feel like the actual screen time that I am having is crazy. I like my phone and the computer and stuff but I don’t like how much I’ve been on it. We have virtual attendance, virtual assignments, virtual everything. It’s kind of like, “Oh gosh, this is a lot.” She said she likes that she gets to go to school in person the two half-days she gets, “But, it’s weird,” she said. “You don’t really make a connection with kids. Like school used to be half academic and half social and it kind of balanced out.

But it’s hard to make connection 6 feet away from someone. You can’t really have a good conversation when people are really around you and you can’t connect with someone or make a good friend. There’s not really a way to talk almost. It definitely makes me like school less. And I like school. I like the academic, but I like the non-academic stuff too. I’m pretty sure every kid does. It doesn’t make you a bad student or anything it’s just kind of like oh I like seeing my friends at school but now that there are no friends or if you’re not in their cohort or they’re going remote, it’s just a little like, ‘This is weird.’” 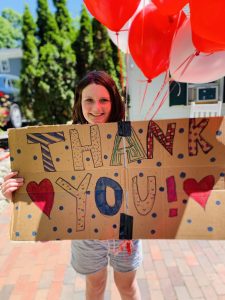 I asked her if she missed the level of connection she had to her elementary school teachers. In a way, that connection was tactile–they’d been hugging her since kindergarten. “Sometimes it’s really hard,” Izzie said. “My chorus teacher? I haven’t seen him at all. I haven’t seen my Spanish teacher at all. I haven’t met my art teacher in person because those are my electives and so I haven’t met any of them. I don’t know what they’re like in person. I don’t really like it.”

I asked her how she feels about the news that, at the time, the vaccine was on the horizon, but still cases were rising. “Well, my first thought is, ‘Oh goodness–more cases. I guess it’s kind of good, not good that it’s happening again, but good that it’s happened once and now we know what we should be doing, this is what’s going to happen, we’re all prepared for it,” she said. “And the vaccine, that’s great if there’s a vaccine that’s awesome but if there’s not and cases are going up then what if there isn’t a vaccine and it doesn’t work then what do we do?”

Is it hard to accept that there could be good news? I asked her. “My brain just doesn’t really doesn’t want to accept it. I know it’s probably true and I know that good things are probably happening and it’s probably going to get better and all that but I just don’t really trust, I don’t know who I don’t trust, I just don’t trust because I don’t feel like there’s really anything I can. It’s so unknown and we don’t really know anything about this. We could learn a new thing tomorrow that changes everything and I don’t really want to get my hopes up.

Asked about silver linings, she said, “I like being home. It’s kind of fun. We have a lot of family time which I like a lot. People are here and it’s kind of nice to wake up and my family is here, which wasn’t really something we had before. There’s definitely been a lot of experiences and cool things, but I also don’t like this year. If I could go back and redo fifth grade and have Mrs. C again, I would literally love that. That would be so amazing. But obviously, they’re not going to have us all redo fifth grade. That wouldn’t be a good idea, but in a way, I kind of wish they would. We didn’t have a move up day. We didn’t have any transition and part of me is just kind of like, why? Just why. Why did this all have to happen?

I asked her what she wanted in the New Year. “Well, I obviously hope for Covid to go away,” she said. “But I kind of hope for more knowledge on everything. What’s gonna happen, I guess. I just want to know things. I don’t like the unknown. Is it going to come here? Is it going to be bad here? And I just don’t really feel like I really know anything right now.”

I told her to fast forward to her 50-year-old self, talking to her (then) 11-year-old self. What would she say? “I think I’d probably say, like something simple, like, ‘It’s going to be OK. Which is what you hear from everyone. But I think hearing it from yourself and knowing, I survived, we’re good, everything‘s going to be fine. This is kind of a cool story you can tell people. It’s gonna go away eventually. You got this.”

No links were mentioned in this episode.