Episode 4: Code Catastrophe: Inside the ICU with Nurse Kim Boggini 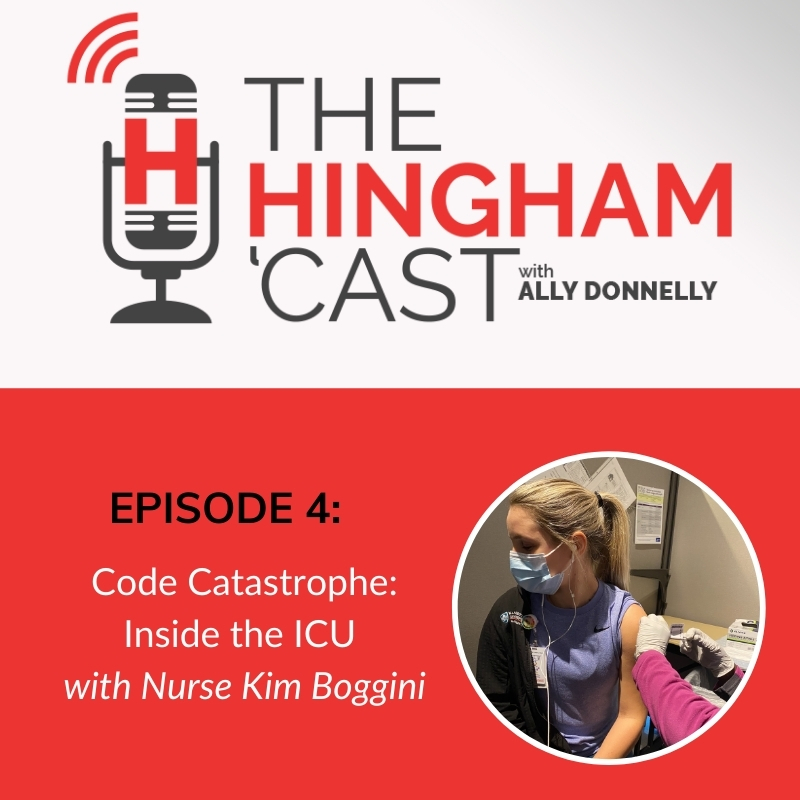 Hingham native Kim Boggini is an ICU nurse at Massachusetts General Hospital. She was in the first wave of employees to be vaccinated. Her first dose was about a week before Christmas and she got her booster or second dose January 8th. Other than a sore arm, she didn’t have any side effects from the first shot, but after the second shot, she felt lousy for a day. “I felt like I couldn’t get out of bed,” she said. “My head feels full. I kind of feel like you feel when you’re starting to get sick and you’re kind of like, ‘I don’t feel that good.’ I don’t have a fever. I don’t have body aches. I don’t have chills. I don’t have a sore throat,” she said. “I’d so much rather feel this way than get Covid.”

Kim let us trail her through the vaccination process and sat down to talk with us about what it’s like to work in a Covid-specialty unit as cases surge. We talked with her a few times in the last month, so this is a compilation of those conversations.

All while the news evolves daily. The first case of the highly contagious Covid variant has been confirmed in Massachusetts—which ups the pressure to get as many people vaccinated as possible before hospitals and healthcare workers—get overwhelmed.

Ally: It’s been 24 hours since your second shot, how do you feel?
Kim: I just feel like going to work, going into these rooms, taking care of the super sick Covid patients, I will not feel as afraid.

Ally: I want to bring you back to something you said earlier. We were talking about the vaccine and how much better you feel for yourself personally, but you have these two kinds of emotions. One of, ‘What a relief to be vaccinated, and a totally separate emotion of you’re still going onto the battlefield. Paint a picture of what that looks like in your unit.
Kim: It’s loud, I am, it’s exhausting. It’s nonstop. You walk in there’s beeping there’s alarms going off.

Ally: How are you looking at going into this surge?
Kim: It’s still scary. It’s still stressful. We’re more prepared. We have treatment options. We know what works. You know, what doesn’t work. As of Thursday (late December) they’ve opened a surge ICU so now we are trying to transfer our stable, intubated patients to the surge ICU so we can open up our beds for the sicker patients

Ally: So what puts somebody in your ICU as opposed to somebody else’s?
Kim: We’re the only unit that specializes in the lung ECMO machine. It’s different than actually having a ventilator. A ventilator is a machine that helps you breathe. An ECMO machine completely acts as your lungs on the outside of your body.

Ally: So you’re getting the worst of the worst shape patients
Kim. Yes.

Ally: Are they largely elderly patients?
Kim: No. To be eligible for ECMO you have to be younger than 65. The patients we have right now on ECMO are in their 30s and 40s.

Ally: It’s interesting because over the course of time that we’ve talked you’ve really described mostly 30s 40s and 50s.
Kim: Yeah, most people do OK, but I see the sickest ones, which is rare, but it is hard to see. You go out and you’re taking care of them and here they are your parents’ age or your age and it’s just terrifying.

Ally: Do they have a lot of underlying health conditions as a group?
Kim: Not necessarily. No. You do get those patients and they’re in their 50s and they have no history and they’re dying. It’s horrible. It’s just really hard to see people saying goodbye on video screens. We do allow at end of life, two people to come in, but that’s just two people. I mean I’m one of four kids, how would you, how would you pick who would get to go in? How did you decide that? Who gets to say goodbye?

As of this recording, the number of patients who are hospitalized with Covid is about 2,100 people which is down slightly from the week before. Kim explains what that looks like at MGH and in her 18-bed specialty unit, a medical ICU, in particular.

Ally: You said something really interesting to me the last time we talked. You said going into the weekend that you were full. But then something happened to open up some beds.
Kim: So right now we’re the hospital’s running on what you call code catastrophe. so that means every single bed in every single ICU in the hospital is full. The only way to get those beds to open is unfortunately if somebody passes. And that day we had three, so that opened up three beds.

Ally: What hits you when you hear that? It’s sad, it’s stressful, there’s so many emotions, I think. What if somebody I know is in a car accident and needs an ICU bed, but they can’t because they’re full. So they’re sitting in the ED needing an ICU bed, but then, oh, wait, hold on somebody died so now you can get them a bed. It’s just, it’s hard to think about. But that’s how the hospital runs sometimes.

Ally: Do you think it’s going to get as bad as last Spring? Has it already gotten as bad as the spring?
Kim: It’s steady. I feel like the Spring was abrupt and the numbers went up quickly. Our numbers have been more stable because of treatments and we know what we’re doing. It’s stable sick. I feel like in the Spring it was chaotic sick. We have a command center now in Boston. Mass General isn’t getting overwhelmed with Covid patients. If we are starting to get overwhelmed, the command center will start transferring patients to the Brigham or Tufts or wherever. So it’s just been this like steady amount of ICU patients.

The one population that is going up is the general floor population. That’s going up a lot. It’s people that just need a little bit of oxygen to kind of get them through, they don’t need to get intubated or anything like that so our numbers in the ICU have stayed pretty stable, they haven’t climbed too drastically. It’s almost like we’re plateauing right now. They did open the surge in ICU because it was starting to get tight and the surge ICU is already full but that just means there’s more ICU, other ICU, beds on the floor open.

Ally: So you’re spreading things out where not everybody has to go to such a specialized ICU—or not an ICU at all.
Kim: Yeah.

Ally: Is it fair to say the majority of the beds are taken by Covid?
Kim: Oh, yeah. Yeah. The thing with covid patients is, we’ve had a lot of recoveries, but they just take so much time. We’ve had people on ventilators for months. So there’s no movement. That’s the problem.

Ally: I don’t want to be a doom slayer here, the vaccine news is phenomenal, but I think I’m seeing a fair amount of, ‘well, it’s over.’ Is it over?
Kim: No. It’s not over yet. No, no, no. We’ll have at least, I think, if people comply and get the vaccine, we’ll be seeing this until probably the early summer until the general population is able to get the vaccine. People are just over it. People are tired of social distancing and the holidays were tough for everybody so people got together and we’re definitely seeing the effects of that now.

Ally: And what do you say to people who are getting a little frayed as we go into winter?
Kim: You know, the same things I’ve been saying. Wear your mask anywhere in public, try to not go out as much. I feel like I’ve known a lot of people that have gotten Covid and they’ve all been fine. They were scared when they had it, but they recovered now. So I think for a lot of people that have had it and had an easy go of it, It’s like, it wasn’t a big deal if you get it you’ll be OK, but it’s hard when you know people that aren’t OK that get it. Which is what we see every day in the hospital.

Ally: It’s kind of a strange time because it sounds like we’re in a situation where there’s light at the end of the tunnel, but it’s also going to get really dark.
Kim: That’s a great way to put it. healthcare workers are getting vaccinated, but the numbers are surging and for the general population, it’s not going to be a great few months.

Ally: What do you think the mental health fallout will be for healthcare workers?
Kim: I’ve already seen it. A lot of people are struggling. It just took a toll on a lot of doctors, nurses. We see sad things all the time, but you don’t see a lot of young people coming in who can’t have visitors, you have to get to know the families over zoom. It’s just a totally different way of nursing.

Usually, if you’re there in person you can walk over and put your hand on their shoulder. You can hug them if you need to. You can just look in their eyes and be there for them, so to kind of look through a screen from the side of the room it’s just a weird weird feeling.

Ally: Yeah, nursing is all about intimacy. You’ve lost so much of that.
Kim: Yeah and I’m sure they’re feeling the same way. For them to know that’s not how we are is kind of hard.

Ally: Kim, what are you doing to take care of you?
Kim: I got a dog. I got a quarantine puppy. I’m definitely affected by everything that I saw and that everything I’m dealing with and the stress. I mean, obviously, you don’t know me, but I’m just a very positive person. I’m usually not down, but this year has definitely been hard. So just talking things out, being open to talking to maybe even–we have support group at work or maybe even talking to somebody else just about the stress of everything.

Ally: I hope you do. I hope you do.
Kim: Thanks. I’ve been thinking about it more because I think with the summer we were so happy to be out of the thick of it And I was like, Oh, we got through it and we were so helpful and hopeful that it wouldn’t happen again. But it is, so I’m kind of feeling down again. Because it’s happening again. It’s just that simple, people are sick again. People are in the hospital again. It’s all covid again. It’s all we talk about. It’s all we talk about at work. It’s gotten to the point where you just wish you could get your typical ICU patient, but it’s all the same patients and they’re all sick and they’re all young and it’s hard.

Ally: How did we support you?
Kim: Well, during the surge we were getting tons of food, now we’re not allowed to get food any more, infection control, which we all laugh about because we got so much food during the spring you didn’t have to bring lunch anymore and nobody got Covid, I almost feel weird when people thank me or call me a healthcare hero. This is my job. I get it, it’s a pandemic, so to support us, follow the rules, wear your face mask. You don’t know what tomorrow is going to bring. Just because you haven’t seen it, you haven’t gotten it, doesn’t mean it’s not there. It’s very much here.

No links were mentioned in this episode.